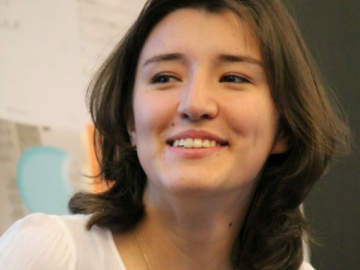 Manon Revel is a PhD student at Institute for Data, Systems and Society (IDSS) at MIT, aiming at deepening our understanding of the information disorder in the Web era, as well as at studying the cognitive processes that drive sense-making of information among strongly connected groups of people.

Along with her Masters, she has been studying the impact of these ads’ content displayed on the credibility of the U.S. news industry, between March 2016 and February 2019. During the 2016 presidential election, and over the 2018 midterm elections, she has found evidence of numerous political and clickbait ads invading legitimate news pages. Further, through behavioural experiments, she investigated the effect that a one-time exposure to these ads have on the perceived credibility on news articles. While no significant effects were found on CNN and FoxNews, the ads did impact the credibility of less well-known publishers.

The migration of news to the web has given advertisers new opportunities to target readers with ever more personal and engaging ads. This sponsored content, known as native advertising, is placed in news publications often camouflaged as legitimate news. Though native ads bring revenue to the struggling U.S. news industry, their ability to draw loyal readers off-site could hurt publishers in the long run.

< Back to Our Team